Late last night we got word that the fundraiser 'zine Saving Throw had gone live on DTRPG.  It's goal is supporting Jim Kramer and his family in their fight against brain cancer while acknowledging in some small way all of the support he gave the OSR when it was a much tighter circle of content creators.  Everything that sparks into a sustained fire needs a generous helping of "right place/people at the right time", and OSRIC and Knockspell hugely benefited from a pro knowing digital publishing and cheerfully offering his layout services (among other talents) to bring old school gaming back to a wide audience.

The cadre of contributors who answered the call are exceptionally talented, and I'm honored that my homages to Jim were included.  For those of you who haven't had the chance to check out the contents yet - I feel it is no puffery to state this much quality playing content is well-worth $13.  Everyone wanted those supporting the fundraiser to get several nights of great gaming out of the mix, and that bar was, in my opinion, surpassed.

One of my contributions is a "super-lair" of sorts; a tribe of lizard men transforming from tribal primitives to a more advanced society under the shepherding of dark powers.  While it's placed on one portion of a treasure map also included in the 'zine, it serves just as well in any swampy marsh on a DM's world if party choices lead towards encountering a large group of the beasties.  Both DM and player maps are included, but the player maps still contain compass directions and a map title.

As more groups adopt VTTs for their weekly play, I'm providing a no-frills version, and a 10' hex version,  of the player map here with all text and symbols cropped out to ease throwing the lair up on your VTT of choice (and also to more easily reorient the whole towards other cardinal directions if desired).  The lizard men have lured many previous (and overconfident) intruders deep into their village only to grind them up against their makeshift stockade - will your players recognize the envelopment and defeat it?  Or will they become the latest batch of slaves worked until they drop into the meat cauldrons of their own accord? 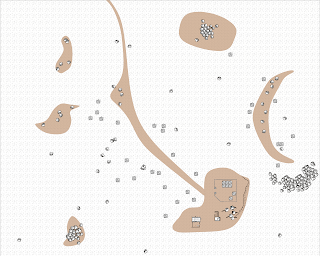 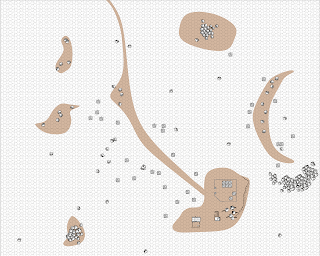 EOTB
Playing around in the sandbox